I spent a couple of days this month at Postgres Open in Chicago.  It was a fantastic conference with a ton of good technical information. (Here are my notes from the Postgres Open sessions). However, my favorite part, by far, was going to check out the vascular surgery conference at the other end of the hotel.

I’ve always enjoyed peeking into other subcultures.  I’ll devour any trade magazine I can get my hands on. If you’ve never read Pit & Quarry Magazine, you probably never considered the importance of maintenance of the belt system on your aggregate conveyor. For all the differences between programming and, say, running a brake and alignment shop, the core business principles are still there.  Everyone still wants to do a good quality job, do it cheaper, do it better, and without going crazy from unreasonable demands from customers or the bosses above. The wisdom of other groups can lead to insight to help our own. 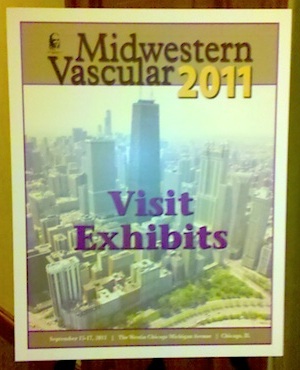 I’d seen the signs for the conference in the hotel earlier that day, so I moseyed down to see what was going on. Inside a room full of exhibits, the vascular surgery community was having its opening get-together. I didn’t see anyone checking badges at the door, which was good because I sure didn’t have one.  I figured they would probably ask me to leave, since I was so out of place, the only one without a suit, but no harm could come from trying, so in I went.

The first difference in parties thrown by medical companies vs. open source database consultants is just how much money the medical guys have.  There was an open bar with a guy in a tux, and another guy was serving little roast beef sandwiches carved off the biggest piece of cooked meat I’d ever seen in my life.  I hope that someone from the kitchen staff got to take home the leftovers and feed his family for a few weeks.

A sales rep in a suit came up and asked if I was familiar with his company’s products.  I figured it was obvious I wasn’t one of the actual conference attendees, standing there in jeans with a laptop bag over my shoulder, so I said, “I have to confess, vascular surgery is just a hobby of mine, I just dabble on the weekends in the garage.”  Blank look. He didn’t get that I was making a joke. “I’m not really a vascular surgeon,” I confessed.  He lit up, “Ah, what’s your main area of practice then?”  I guess it wasn’t that obvious at all.  I said, “I’m not a doctor at all, I’m from the database conference down the hall.”  He huffed back to his circle of friends in suits. 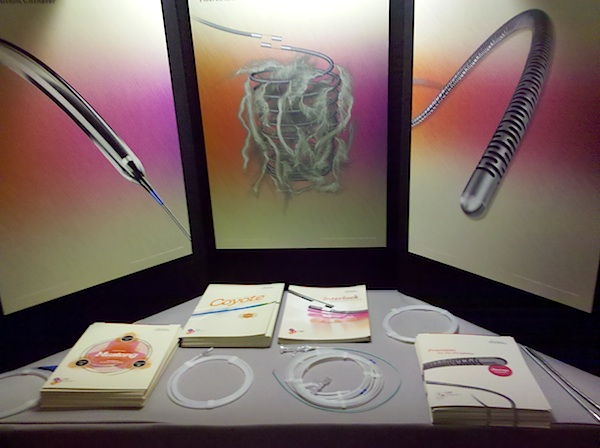 The range of products and needs of the vascular surgeons is amazing.  There are instruments to go inside the vessels, and there are wrappers that go around them.  Some products are fabric, and some are coiled wire. Signs trumpeted the capabilities of one brand of wire mesh over another, allowing 60 degrees of angulation over a 10mm distance, or up to 75 degrees of angulation over a 15mm distance.  Who knew it was so tough to wrap blood vessels in wire?

At another booth, a rep started her spiel and I explained right off that I was from the database conference.  She thought that was the most amazing thing ever, laughing and saying “That’s incredible, I’ve never heard of that!”  I explained “Hey, we’re all geeks, we like science, we like learning.  How could I not?”

She was selling surgical tools, and she explained a little about the various doodads that the doctors put in and around the arteries during surgery, although she was light on tech details. I asked her about the buying process, and who makes the decisions about which tools from which companies get bought by the doctors. Purchasing processes are interesting to me because my company at my day job sells books to school libraries, and how those purchasing decisions have become more centralized over time. She was more eager to talk about the sales process, and explained that it each surgeon decides which tools and appliances he or she will be using during the surgery.

Finally, I talked to a guy who was selling his company’s form of thrombin. I told him right off that I wasn’t going to buy any because I was not a doctor at all, but he was more than happy to give me a crash course in thrombin.  Thrombin is a substance that helps close bleeds in blood vessels, and it’s in our blood normally, but sometimes during surgery the patient’s body needs help.  The two major forms of thrombin are from human blood and bovine blood, but his company sells thrombin from Chinese hamster ovaries, which is better than the other two for some reason I don’t recall.

I asked him about the purchasing decision behind thrombin, and he explained that it’s usually made at a hospital level, but with a lot of hospital-wide debate.  Some doctors only want human thrombin because they want as few potential complications as possible, and others want bovine for other technical reasons.  The doctors also have to coordinate with the hospital pharmacy because they have their lists of concerns, not least of which is dollar cost of the products.  Sounds like the eternal struggles between programmers and sysadmins, no? 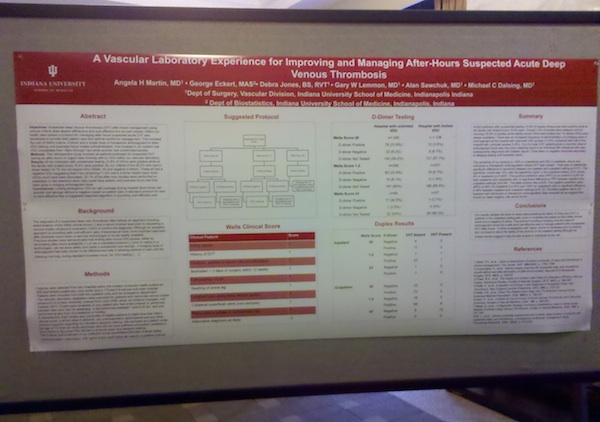 … a dozen huge bulletin boards showing the research papers that were to be presented at the conference’s sessions.  Large full-color banners, 10’x3’, gave the details of the research, often with large full-color photos of blood and guts and “frank purulence”.  Clearly, when you’re presenting at a medical conference you can’t pull a Schwern and crank out the slides in the hallway the morning of your talk. They were so detailed, I wondered what would actually get presented in the sessions.  Would the doctors just restate what was already on the banners?  I guess I’ll have to crash another conference to find out.

I can’t overstate how important I think it is for us to branch out and learn about more than just the jobs we do every day.  We are all programming for some sort of business, and there is much to be learned from other businesses around us.  Even more, we can learn from other communities as well. For example, at this year’s OSCON, the convention hall also hosted the Sock Summit, a few thousand sock knitters getting together. Ricardo Signes paid a visit and found that they have a similar problem to the open source community: The sock knitter world is almost all female, and they want to attract more men to sock knitting, but the men that do show up often feel alienated.

What other communities and subcultures have you visited? What did you take away from them? Please post your stories in the comments.